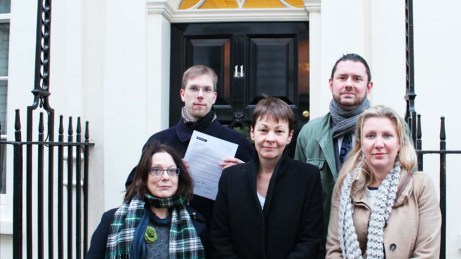 All in it together?

Faced with cuts in Government grant that could amount to £26m, the Green Group on the Council has proposed a city Budget based on a 5.9% Council Tax increase, which would raise £4m and would require approval in a referendum: Labour opposes this, and supports the 2% increase that Councils may make without a referendum, while the Tories are simply split.

But now the Brighton and Hove Green Party has voted to put forward a budget under which there would be no cuts at all. The motion is as follows:

This General Meeting notes the Motion passed unanimously (with one abstention) at the December 2015 General Meeting that the Brighton & Hove Green Party supports the production of an alternative Budget for 2015-16 that would protect local services and employment, not cut them.

The cuts to local services required to “balance the budget” for 2015-16 are the direct result of massive and unprecedented cuts by central government to the local government support grant, cuts which could mean a further cut to the Brighton & Hove budget of over £100 million by 2020.  This will effectively destroy local services as we know them.

The cuts required to balance the budget for 2015-16 alone would require  a restoration of more than £20 million of government grant or a Council Tax rise of over 20%. The proposed 5.9% Council Tax increase is therefore not viable as a means to fight the cuts or defend the vulnerable. It is a regressive tax on the poorest, and it would hardly dent the massive cuts still required. To propose this rise in Council Tax in conjunction with a cuts budget would fatally undermine the Green Party’s anti-austerity stance locally and nationally.  It is the worst of all worlds.

We are now seeing a “Green surge” and rising membership especially amongst younger voters, the primary reason for which is our inspiring anti-austerity message. If the only example in the UK of the Green Party in office were to implement a large cuts budget just before the 2015 General Election that would disillusion and alienate many of those new supporters. It is likely it would severely damage not  only the local party but the national party’s prospects in the election.   The Brighton & Hove Green Party will not support any Brighton & Hove -Council Budget for 2015-16 that makes further cuts to local services. We support a no cuts budget identifying how much government grant now needs to be returned to Brighton &
Hove to avoid horrendous damage to local services. It is therefore the policy of Brighton & Hove Green party that any budget that makes further cuts to local services should not be voted for by the Green Group of  Councillors, nor abstained upon to allow it to pass.

The Brighton & Hove Green Party advocates a strategy of complete resistance to implementing further cuts to local services, including

The Party notes further that the Convenor is not standing in the local elections this year and is concerned that it could very easily damage the Party’s electoral prospects if the Green Group is not led by a Convenor who has a stake in the election, and can lead the Group through the election and potentially beyond. With this in mind, the Party asks that the Convenor steps down at the earliest possible opportunity to allow for internal elections to take place for a Convenor who can be the primary public figure in the campaign and lead the Green Group towards the best possible result.

The first motion, in particular, represents the final meltdown, and exposes the Green Party’s aims and rationale with cruel clarity.  This is not about people in Brighton, bearing the brunt of £100m worth of cuts to the city Budget that the election of a Green MP has done absolutely nothing to prevent. This is about protecting the Green Party’s anti-austerity credentials, and enabling the Green Surge.  The effects of the cuts are not mentioned.   It begs the question of whether services and jobs in our city are seen by this party of the entitled and prosperous as anything more than the collateral damage of Caroline Lucas’ re-election campaign.

Second, it is the decision of a party that is lacking in the will and inclination – and, I would argue, the moral courage – to carry out the job that the people of Brighton elected it to do in 2011.  The Green manifesto in 2011 talked about resisting cuts. But this motion, steeped in the language of resistance, achieves precisely the opposite. It invites Eric Pickles to send in his commissioners within weeks of an election that the Greens are universally expected to lose.  The proposers of the motion include a number of Green councillors, some of whom are standing down in May. A cynic could easily mistake if for a scorched earth policy, or possibly as the view of a scared party adopting a core vote strategy to stem its predicted electoral losses; at the very least it as gross a dereliction of duty as you could imagine.  Yes, there are lots of fine words; but you do not cure cancer by shouting slogans outside an oncology unit. The Greens remain an adolescent political movement because they remain incapable of grasping this essential truth.

Third, it overturns the policy that Caroline Lucas, Natalie Bennett and Jason Kitcat declared united their party – that of seeking an above-inflation Council Tax increase through a referendum.  It states quite explicity that Lucas’, Bennett’s and Kitcat’s preferred route does not make any difference. It endorses Labour’s rationale for opposing large council tax increases – that they are regressive and hit the poor disproportionately.  It completely tears up the central plank of Green Party policy in Brighton and Hove. They’ve asked Kitcat to go – are they asking the same of Lucas (who is reported to have attended the meeting) and Bennett?

Finally, the whole rationale behind the working of the motion is that only a change of Government is can deliver a fairer settlement for local Government.  But, not only can the Greens not deliver that, but under our electoral system the most likely outcome of a big Green surge would be to keep Cameron in No 10. Is that what even the smuggest Green activist really wants to achieve?

For those of a more mature political generation, there is possibly no more compelling piece of political theatre than Neil Kinnock’s evisceration of Militant at the 1985 Labour Party conference.  Compelling not just because of the scenario itself – a courageous and passionate piece of oratory from a leader facing a conference many of whose delegates were likely to be hostile – but because the issues really mattered.  People remember the phrases about a Labour council sending taxis scuttling around the city with redundancy notices for Council staff – but what follows is most important: a commitment that Labour will never play politics with the people who depend on Council jobs and services.

“You cannot play politics with people’s jobs and services”.  Faced with the reality of the coalition, the only responsible – and indeed adult – solution is to save what you can and campaign for a Government – a Government – that can effect real and lasting change.  As I have written before, the poor and vulnerable of this city deserve far more – so much more – than to be the collateral damage of a failing political party.

“Some of our colleagues, it seems to me, have become like latter-day public schoolboys – it’s not whether you won or lost, or how you played the game”. Green councillors in Brighton and Hove have protested against academies, but have failed to deliver the new secondary school they promised in 2011.  They have talked about neoliberalism, but their leader has told Council that 40% child poverty in East Brighton is “on target” and have voted against Council monitoring of food banks.  Their Councillors are apt to use the phrase “petrolheads” yet are complicit in authorising vanity projects like i360, whose business case is dependent on attracting hundreds of thousands of car-borne visitors to the city. A party of privileged pound-shop Derek Hattons who, when challenged to defend their record, resort to irrelevance about Iraq; a party who – from top to bottom – prefer the adolescent posturing of protest to the serious business of Government.  Their language – abstract, reified, ideologically remote – has detached itself increasingly from the realities faced by people living in a city of low and falling pay and soaring housing costs, and in which 3000 people depend on food banks.  Again, Kinnock’s words are eerily prescient; and ours is a city increasingly unable to afford the luxury of Green sermonising.

And the Green Party at all levels has some serious questions to answer. Do its leaders – Caroline Lucas and Natalie Bennett above all – back the Brighton and Hove Green Party’s decision?  How would Caroline Lucas, as MP for Brighton Pavilion, intend to represent the city in Whitehall and beyond when her party has voted to opt out of the political process? What has changed to make Lucas’ party abandon the policy she endorsed less than two years ago?

The votes at this General Meeting are the votes of Caroline’s militant tendency. A party in a death spiral, incapable of looking beyond its own internal disagreements to the needs of the people it was elected to serve.  A party of posturing and grandstanding, that is scared to its core of exercising real responsibility. A party that will be rejected wholesale by the electors of Brighton and Hove in May.